ABC Wednesday, my “C” is for cactus-Edible Cactus.
Do you know this kind of edible cactus? I saw it was sold in NTUC two months ago. I bought one back home but not sure what to do with it. After a week, I just planted it in a small container pot and left it at a corner. I don't even remember to water it. It is surprised me today, it grows one new leaf.
So I am searching more information about edible cactus, according to wikipedia, Edible cactus is also known as nopales (no-PAH-les), nopalitos, cactus paddles, or cactus pads. This vegetable is popular in Mexico and other Central American countries, parts of Europe, the Middle East, India, North Africa and Australia. Its popularity is increasing in the United States, where it can be found at Mexican grocery stores, specialty produce markets and farmer’s markets.


Edible cactus is characterized by its fleshy oval leaves (typically called pads or paddles) of the nopal (prickly pear) cactus.With a soft but crunchy texture that also becomes a bit sticky (not unlike okra) when cooked, edible cactus tastes similar to a slightly tart green bean, asparagus, or green pepper. Cactus pads contain beta carotene, iron, some B vitamins, and are good sources of both vitamin C and calcium.

Nopales are very rich in insoluble and especially soluble dietary fiber. They are also rich in vitamins (especially vitamin A, vitamin C, and vitamin K, but also riboflavin and vitamin B6) and minerals (especially magnesium, potassium, and manganese, but also iron and copper). Nopales have a high calcium content, but the nutrient is not biologically available because it is present as calcium oxalate, which is neither highly soluble nor easily absorbed through the intestinal wall. Addition of nopales also reduces the glycemic effect of a mixed meal. Nopales are low carbohydrate and may help in the treatment of diabetes. 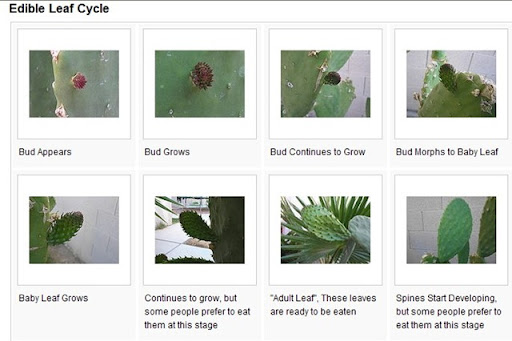 Still no idea what to do with this cactus, cook it? make into cactus juice? make salad? Do you have any idea? Have you eaten before?

Beats me! I wish I knew. Imagine eating cactus! Well it sounds nutritious according to what you found in Wikipedia.

I wanted to do 'Cactus' for 'C' too, but I did not have time to go to this special cactus-garden we have here in Norrkoping. Maybe I'll do it for Alphabe-Thursday for Mrs. Matlock in September.

Maybe you will get answers to your questions from other participants who know more about plants.
Best wishes,
Anna
Anna's Cats

How fascinating. I love taking photos of cactus. I'll have to look for this one in the one nursery around here that has a fairly large collection of cacti.

Thanks for including all the information.

I remember being told about the uses of nopales (Prickly Pear) on a guided trail ride through Zion National Park, but I have forgotten them all! I guess I knew I'd never have the chance to cook them here in England so my brain threw the information away. LOL!

Interesting post, and it brought back some memories, too - thanks! And on behalf of the team, thanks for taking part in ABC Wednesday, too. :)

I used to have cacti, the only plant I couldn't kill!

I see these in Mexican stores too. And I wonder how they cook it. I guess I have to asked my Mexican friends how they cooked it. But what I knew about some people they cut the leaves and squeeze the juice and drink it I don't know if it taste bitter or it has an itchy feeling when it touch your skin I don't know. This is a new lesson for me thanks for sharing I have to research this one. Happy Wednesday!

I haven't tasted any, but there are several being sold here in Houston. I think Prickly Pear is the most common of edible cacti. :) Cool take on letter C! :)